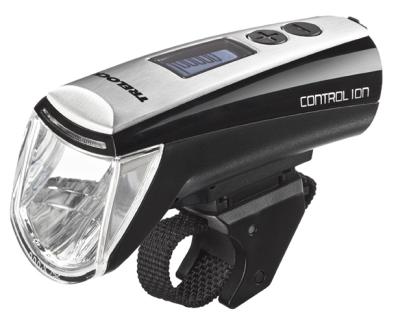 Whether you’re commuting or can only find the time to ride very early, or very late, as the days grow shorter, you’re more apt to be riding in the dark. For any type of riding in the darkness, the German-tech Trelock Control Ion LS 950 headlight will provide ample light to meet your needs. In short, it is among the most powerful, focused and brightest headlights I’ve ever seen, coupled with super-long run times across its power settings. It’s also quite straightforward and easy to use.

The first thing you notice about the Control Ion light is the very simple display, and its two black buttons, one with a + (plus) on it, the other a — (minus). In the display window, which illuminates when the light is turned on, are two rows of five bars each.

The right row indicates which of the five brightness settings the light is in. The left side displays the approximate percentage of battery life remaining. Above both rows of bars is a 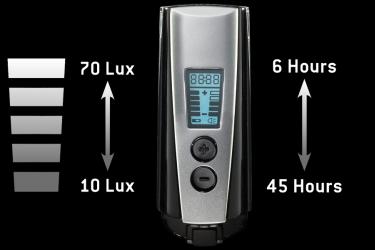 number, in hours and minutes, with precisely how much battery life remains for that particular brightness setting.

When you push the + or — button to adjust brightness, the battery-life (run time) remaining immediately recalculates and displays at the top of the window. It’s altogether intuitive and easy to read. At a glance, you always know which brightness setting you’re in, and exactly how much run time remains.

A USB cable (included) that connects to a port at the back of the light allows you to recharge the Lithium-ion 3.7V battery using a USB port on your computer (approximately 10-12 hours for a full charge). With an optional wall charger, charging time can be reduced to approximately 3.5 hours.

The mount is a one-piece, no-tools-required bracket that uses a nylon band (rubberized on the side that contacts the bar) to securely wrap around the handlebar.

While every aspect of this light’s operation is easy and intuitive, the German technology literally shines though in the Control Ion’s LED-powered beam, which is focused by a parabolic-shaped, faceted lens. Trelock calls it an “iBeam-tec reflector with high-power LED.” It’s this technology, combined with the powerful Li-ion battery, that really set this light apart.

Unlike most lights on the market, the Trelock Control Ion measures its output in lux, not lumens. This is an important distinction. Tom Petrie, owner of Cantitoe Road, the company that sells the light in the U.S., offered this explanation:

“Lumens refers to the amount of light generated, whereas lux describes the illumination intensity in a given area. Imagine holding a fiery torch above your head versus having a 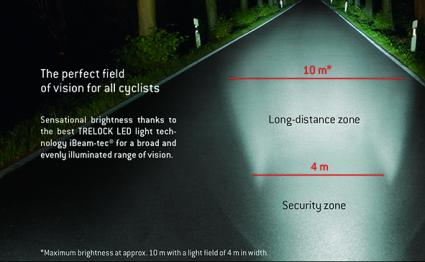 flashlight with a directed beam. The actual amount of light generated by the flashlight might be less than the fiery torch, but the flashlight would serve you better. It maximizes the light output by focusing all the light exactly where you want it.”

And that’s exactly what the Trelock LS 950 does: It projects the brightest possible light across a just-right depth of field in a precise beam width. (See the accompanying photo.) It casts a powerful, bright light just where you want it as a rider — allowing you to see what’s ahead, and far enough to each side, to maximize your safety in dark riding conditions.

At the lowest setting (10 lux), the run time is a remarkable 45 hours. And at the uber-bright highest setting (70 lux), the light shines for an equally noteworthy 6 hours. I tested claimed run times across the settings and found them to be fairly accurate. The run-time display counts down, leaving you no doubt how much time you’ve got left, which allows you to adjust the brightness to conserve battery life, if needed.

At 70 lux, the light is much brighter than my car headlights and allowed me to see even small rocks in the road in complete darkness. (You might choose to save the 70-lux setting for absolute pitch-black conditions.) And it was evident from watching how approaching cars reacted that the drivers obviously took notice of my “vehicle.” You’ll most definitely see — and be seen — with this light on board.

This is one serious headlight, with a substantial battery that offers ultra-long run times across the settings. Its operation is simple and easy, allowing the German technology to truly shine through in the focused beam and power from the iBeam-tec reflector and LED.

Because of the reflector and battery size, this is not a small, lightweight, streamlined light. And it’s not cheap, either. But the price is reflective of the high-tech features and superior performance of the Trelock Control Ion LS 950. It is among the most powerful, focused and brightest headlights I’ve ever seen, with remarkable run times.

John Marsh is the editor and publisher of RBR Newsletter and RoadBikeRider.com. A rider of “less than podium” talent, he sees himself as RBR’s Ringmaster, guiding the real talent (RBR’s great coaches, contributors and authors) in bringing our readers consistently useful, informative, entertaining info that helps make them better road cyclists. That’s what we’re all about here—always have been, always will be. Click to read John’s full bio.