The phenomenon that we have to be very aware of when tensioning and truing wheels is “spoke twist” or “spoke wind-up.” As we tension the spokes tighter and tighter, the pressure and friction within the threads increases greatly, and it eventually overcomes the spoke’s ability to resist twisting. So, instead of the nipple turning on the spoke threads, the spoke itself twists until the torsional resistance of the spoke overcomes the friction, and the nipple itself turns on the threads. This can be about a 1/4 twist of the spoke.

Of course, the thinner the spoke, the lower the spoke’s resistance to twisting, which is why it’s much harder to build wheels with skinny center-section spokes like Sapim Laser and DT Revolution. The resistance to twist of the 1.5mm centers is far less than the robust 2.0mm thickness of plain gauge spokes or the 1.8mm centers of normal butted spokes.

With Lasers, the spoke can twist up to about a 1/4 of a turn without the nipple moving on its threads. So you think you tightened a spoke a 1/4 turn and when it stress-relieves itself on the first ride (if you don’t remove the twist while building the wheel!) the spoke unwinds, and your once-true wheel isn’t true anymore.

Multiply this by (potentially) all the spokes in the wheel, and you have an incredibly bad wheel build and a possible wheel building disaster.

Place a masking-tape “flag” on a spoke, just above the wrench. Place it at 90 degrees to the rim plane. When the nipple is turned, we can see the spoke twisting by the movement of the flag. All of a sudden the flag will stop moving (and spoke will stop twisting). It’s from this point that the nipple actually moves on the threads. Now turn the wrench the amount that you wanted it to turn (1/2 a turn, maybe? 1/4 turn?). We have now tightened the spoke by that amount.

Next, we have to remove the unwanted spoke twist. Unscrew the nipple until the flag returns to its original position of 90 degrees to the rim plane. 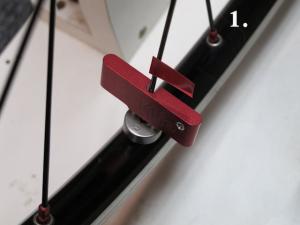 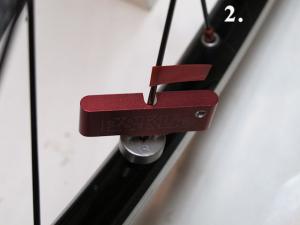 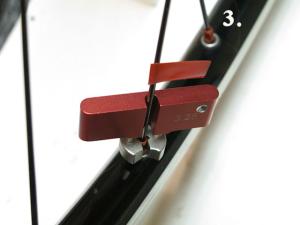 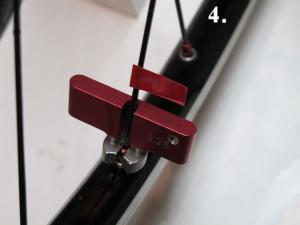 The other way to gauge twist is to feel it. Grab the spoke, just above the wrench (with the wrench at 6 o’clock on the wheel), with finger and thumb. When the nipple is turned, we can 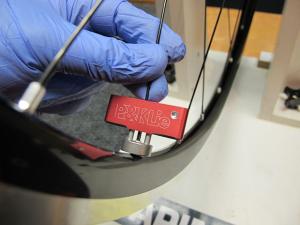 feel the spoke twisting. (See photo.) All of a sudden the spoke will stop twisting and it’s from this point on that the nipple actually moves on the threads.

But this twist has to be removed. So let’s assume you want to tighten the nipple a 1/2 turn. Grip the spoke and turn the nipple. Observe and feel when the spoke stops twisting. Is it a 1/4 turn? About a 1/5th of a turn? Remember this approximate number.

Now back the nipple off to remove the 1/4 turn of twist. The net result is that you tightened the nipple 1/2 a turn. This has to be repeated EVERY time you move a nipple, whether tightening or loosening! Skinny spokes like Sapim Laser and DT Revolution are not for the faint-of-heart or the careless wheel builder.

Probably the easiest spokes to build with are the flattened aero Sapim CX-Ray — you can easily see any twist due to the spokes’ flattened mid-sections. You prevent the spokes from twisting by holding them with the special spoke holder from Sapim, or a holder that you can make yourself.

During the wheel building process, we subject the spokes, rims and hubs to many high stresses. The main contact areas between all these parts need to be correctly seated and bedded in the workshop during the building process. If we’re careless and don’t perform these crucial steps, they will happen naturally during the first few rides on a new wheel. This leaves the wheel’s integrity compromised and its life-span can be reduced.

We need to remove any spoke twist, bed spoke heads into flanges, straighten the spoke path from hub to rim and bed the nipple seats while building the wheel in the workshop.

All wheel building books contain steps to accomplish this; some more or less than others. I list ALL the ones I’ve ever found on my wheel building webpage, under “Stress Relief” ( http://miketechinfo.com/new-tech-wheels-tires.htm). I perform them all, as skimping and time-saving has no place in my home wheel building; and it shouldn’t in yours, either.

In Part 3 of this “basics” series, I’ll talk about the need for equalized spoke tensions and which way to turn nipples – with a big tip that you won’t forget!

I have a wheel with CX-Ray spokes and one of the spokes is twisted a full turn. Can I fix this, and if so, how? – Anonymous

As we know, CX-Rays are flattened aero spokes, so any twist is easy to see. But what bothers me is that it’s a full twist. Normally, if not held, spokes twist about a 1/4 turn before the nipple moves on the threads. I’m suspecting the spoke is too long and the nipple bottomed-out on the threads which would make the spoke twist further if the person doing the job wasn’t knowledgeable.

Remove the tire and rim-tape and see if the end of the spoke sticks up above the nipple. If it does, even by 1mm, then the spoke is too long. Check the ends of all the spokes and report back. This spoke has been twisted past its plastic yield limit and will be permanently twisted. Get rid of it!

Raht Racer Velomobile: ‘As Fast as a Car?’

We’ve all seen various “velomobiles” before – that always-interesting mash-up of bike and automobile.

Seldom do they purport to allow the driver to reach speeds “as fast as a car.”

This one does, with an interesting twist. The pedals don’t connect directly to the drivetrain. Rather, they help power the electric-assist motor that calculates and supplements the torque already being created.

The upshot is a vehicle said to be capable of 30mph (48kph) and higher cruising speeds generated by an “average adult.” (Of course, with all RBR readers being well above average, one would think we could power along much faster in the Raht Racer!)

Have a look at the Raht Racer Velomobile(which sort of resembles the Alien in the namesake movie series!).

A Bit of Feedback from ‘False Equivalencies’ Column

Thanks to all who wrote Comments or emailed me directly about my column last week, Correcting the False Equivalencies in the Cars vs. Cyclists Debate. It’s great to have engaged readers who value the importance of continuing the discussion on important issues like this one.

One reader, David Napoli(@Biff_Bruise), via Twitter, brought the subject of the Outside article, Megan Hottman(@cyclist_lawyer) into the conversation. Megan suggested checking out a current survey being done by the University of Denver to better understand cyclist’s behavior.

It’s a 10- to 15-minute survey (I took it, and commented extensively), and it really does work to get to the bottom of why cyclists do certain things in certain circumstances – using photos of different types of intersections, under different scenarios, to elicit honest responses and feedback from both drivers and cyclists.

Interestingly, the survey, http://www.surveygizmo.com/s3/1885930/bikingbad, asks some of the same questions about breaking the law, and why they break the law, of drivers as it does cyclists. One imagines that data will offer a decent comparison of the behavior of people behind the wheel vs. in the saddle.

If you have a few minutes, it’s a good exercise to take an honest accounting of how often, and under what circumstance, you deem it OK to scoff certain laws behind the wheel, and on the bike.

Another reader and friend in cycling, Seth Shaw, sent a link to another interesting article. He noted how similar it was to the issues discussed in the column, only focusing on pedestrians instead of cyclists. The headline of the piece gets right to the heart of the matter: Why Hitting A Pedestrian Is A Nearly Unpunishable Offense.

The article is of particular interest in discussing the fact that for most of the past century in the U.S., road systems have been designed almost exclusively with automobile traffic in mind – and are governed by laws that are likewise specifically designed for motor vehicle traffic. The result is a system that is in many cases outright hostile and dangerous to the other, “lesser” users of the road system (including crosswalks, etc.) – pedestrians and cyclists.