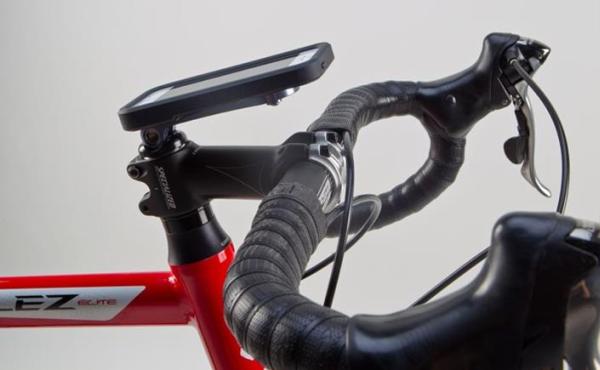 I learned about Rokform’s V.3 iPhone 6 bike mount while riding in Napa, California. I kept getting lost and was finding my way with Google Maps on my phone. This meant holding the phone in one hand to hear the directions, because I didn’t have headphones and didn’t want to risk looking at the map. I was also holding the phone because getting it in and out of my jersey pocket was challenging.
But even just holding the phone wasn’t entirely safe. I couldn’t easily shift or brake with both hands. And, I was afraid I might drop the phone, too.
So, I stopped by Calistoga Bike Shop looking for a bike mount for the phone. Besides making navigation easier, I thought it would be fun to be able to listen to podcasts while biking, now that smartphone speakers are loud enough to hear on quiet roads. Selecting tracks, adjusting the volume and hitting pause when outside noise makes trying to listen useless would all be easier with the phone in a mount right in front.

Apparently, phone mounts are hot right now, because the guy at the shop showed me their nice selection right up front. He told me that besides safely and securely holding your phone where it’s easy to access, a quality mount lets you take photos and videos even while you’re riding! I hadn’t thought of that.
When I explained how I ride, he told me there was only one mount he recommended for serious road riding: Rokform’s. He had one on his bike and demonstrated how it held his iPhone. When I saw how clean and easy to use it is, I was sold. Unfortunately, the kit for my iPhone 6 wasn’t in stock yet. So to get one for review, I had to order it from Rokform. That was over a month ago, so shops should have them in stock by now.

A mount and a case

The V.3 is composed of 2 Rokform products, the V.3 Mountable Case and V.3 Bike Mount. You need both. I’ve seen the V.3 Kit offered, too, including everything you need, but it’s not sold that way on Rokform’s website as far as I can tell. So, check your local bike shop.
The Rockform Mount takes the place of your headset stem cap. It’s a quick 30-second job to install. The upright pivots so that you can position the phone for optimum viewing/access. A separate 5mm bolt lets you tighten it to lock it at the best angle, or you can leave it a bit less tight to be able to change the position by hand.

The clever feature of the bike mount is Rokform’s RMS integrated mounting system, a 4-tooth “gear” that mates with a 4-slot recess in the back of the Rokform case. To place the phone on the mount, you just line up the teeth with the slots, press down and twist clockwise a quarter turn to lock the phone to the mount.
To ensure the phone can’t come off, there’s a secondary lock, magnets in the back of the case and mount that add about 10 pounds of holding power. Plus, a lanyard is included that you can attach to your phone and loop around the mount or stem.

When you attach the phone you can feel how securely it’s held. To put it to a real test, I mounted it to my hardtail mountain bike and hit the dirt for a couple of hours, trying to shake the phone free or loosen the mount. Both refused to budge. Short of crashing, I don’t think anything you could do on the road could separate your phone from this mount.
If you do manage to drop the phone, it’s good to know that the Rokform case is made of a high-impact polycarbonate outer shell with 6-sided shock-proof protection and a shock-absorbing inner liner. The phone snaps into the case for a nice, tight fit. You’ll need to add your own screen protection if you don’t already have it.

The Rokform’s magnet in the case lets you use your phone in unique ways because it will now “stick” to anything magnetic. So, you could “mount” it on a repair stand for watching a how-to video while tuning your bike, or place it on a window frame or post to take a timed photo of your riding group. I keep finding new ways to use this cool feature. (And yes, it’s safe to have a magnet next to your phone.)
In the V.3 kit, you also get a Rokform Magnetic Car Mount. This is a magnet about the size of a quarter with an adhesive back that you stick on your car’s dash (or wherever you want) so that you can mount your phone for easy visibility and instant access. I now have these in both our cars because it’s so handy having the phone right there. The phone hasn’t come off so far and I’ve covered some rough pavement. I’m interested to see if the adhesive stays attached to the dash with the hot sun on it all day. So far, so good.
Also included is a zip-lock waterproof bag for the phone. It’s for use when the phone is not in the bike mount. It will actually slip over the phone when it’s in the mount but you can’t seal it, so it’s more for protection when the phone is separate. That’s important to note because the Rokform case does not protect your phone from water and you will want to protect it if you ride in the rain or sweat a lot, by removing it and putting it in the bag and then in a pocket or pack.