Ever wondered if you can lose weight cycling? As a suggestion to those of you who belong to a cycling club, Coach David Ertl thought it would be fun to share with you information about how his own hometown club in Des Moines, Iowa, has used his eBook as the foundation for a seasonal weight-loss contest. The results speak for themselves, but there’s nothing stopping individual riders from reaping the same benefits on their own.

In the summer following the release of my eBook Pedal Off The Pounds (POTP) that January, the Des Moines Cycle Club (my hometown bike club) decided to use the

book as the basis for a weight-loss and exercise challenge, somewhat based on the TV show The Biggest Loser — except no one gets voted out of the club. (That’s me, at left; I follow my own POTP advice!)

The contest was the brainchild of Ride Director Jason Rose and co-led by our club president, Georgie Libbie. Part of the challenge was about getting people to learn to eat more healthfully and lose weight, and part of the motivation was to introduce people to cycling and to get them to realize that exercise can be fun.

The best way to stay active and lose weight is to find an activity that is fun and people can stick with, which (yes, I’m certainly biased here) we all know is cycling. The Pedal Off The Pounds Challenge was a great success, with the winner losing more than 53 pounds during the 22-week program!

The following year, our club decided to repeat the POTP Challenge. The 100 participants were divided into 4 teams (red, purple, yellow and green – each of which had T-shirts in the team color), and we met every Monday evening. These weekly meetings included a weigh-in for all participants, and the teams and individuals losing the most weight that week received rewards and recognition. Winners of various categories received strings of beads where were traded in at the end of the season for cycling accessories.

After the weekly weigh-in and awards ceremony, all the teams either took part in a fun cycling-related challenge, such as a slow race, or listened to a motivational speaker. We finished up the evening with a group ride (no-drop policy in effect).

One year’s grand prize winner, Lisa Klever, lost 16% of her body weight during the Challenge.  After the program ended, Lisa continued to lose weight and has now lost 69 pounds! 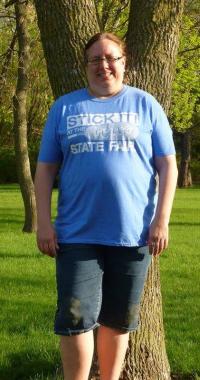 Here are before and after pictures of her.

The combined weight lost in the a single year’s challenge was at least 583 pounds. Not all participants were able to make every weigh-in, and we think it’s safe to assume the total was even higher.

We continue to tweak the challenge from year to year. For example, following the incredible success of the original 2013 season, Georgie sent out a survey to the POTP participants and asked them how much they spent on bikes and accessories as a result of them joining the POTP challenge. The results were astounding; participants spent $60,000 on equipment during the season!

So Georgie went around to the local bike shops and shared that statistic with them and asked them to contribute prizes to the 2014 challenge.  She successfully obtained a bike rack, a new Trek bike and lots of other accessories as donations for prizes. Lisa won the bike as the grand prize.

Great Way for a Cycling Club to Generate Interest and Enthusiasm

A Pedal Off the Pounds Challenge is a terrific way for a club to generate interest and enthusiasm around cycling. Most cycling clubs feature a cross-section of riders with varying interests and abilities, and the POTP Challenge is something that unites all of us in a common – healthy – pursuit. Who among us, even the fittest, doesn’t usually have at least a few extra pounds we’d love to get rid of?

So if you belong to a cycling club, consider implementing your own version of the challenge. I’d be happy to share any additional details with you about how we structure our program.

But you don’t have to be a member of the Des Moines Cycle Club – or any club, for that matter – to benefit.  John recently shared with me this email testimonial from RBR Premium Member Steven Seidenberg of Wheeling, Illinois:

“On August 26 last year I purchased Pedal Off The Pounds and have lost 37 pounds to date.  This was the best thing I ever read. The before picture is in an XL jersey and XXL bib 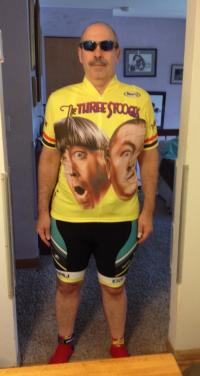 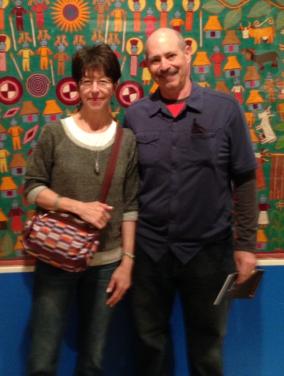 shorts; I weighed 220 pounds in May 2014 before starting riding. The after picture is at 183 pounds at the end of October 2014. I lost so much weight that on that vacation we took several hours to purchase new pants with a waste size 38, 4 inches smaller than before, and Medium shirts, down from XL.

“In the past I ran and used bicycling as cross-training.  I would burn lots of calories exercising but did not change what I ate. Then I found your plan and it spoke to me in a way that nothing else has in the past. I read it once and started to get what you were talking about. The second time through I used a highlighter and then discussed with my health-conscious wife.

“After the third time I was comfortable with the eating part. Re: biking, I am still doing my own thing but am starting to see the light in terms of [having] an organized training plan with goals for my workouts. It matters what I eat. Good food gives me energy, keeps me full and alert. Fast food and bad food makes me sluggish and carry excess fat.”

I suspect Steve isn’t the only RBR reader who has read Pedal Off The Pounds and found it helped them lose weight through cycling – which is exactly its purpose.  We would love to hear your success stories, too. Please share them with us.

In Pedal Off the Pounds, USA Cycling Level 1 Coach David Ertl eschews diet book gimmickry for the hard truth, detailed nutritional and dietary knowledge, and a proven approach to weight loss for cyclists – whether weight loss alone is your goal, or whether losing weight and simultaneously training to improve cycling performance is your goal. Losing weight through exercise alone, without changing your diet, is difficult and time-consuming. Losing weight by changing your diet, without increasing your exercise, is equally difficult. But when you combine a reduced-calorie diet with increased energy expenditure, weight loss becomes manageable and noticeable.

Read more about the program.