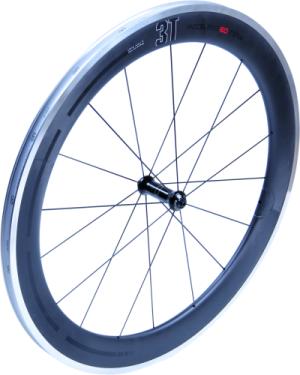 Look around on your next big group or organized ride. Chances are, you’ll see any number of carbon wheels on display. There’s no denying they are popular accessories these days. And if you look just a bit closer, on some of them you’ll be able to pick out the telltale aluminum braking track typical of some of the “hybrid” carbon clinchers.

Nearly all the major wheelmakers now offer a full lineup of carbon clinchers, some all-carbon and others with the aluminum brake track, which have both advantages and disadvantages compared to their tubular and all-carbon counterparts. The primary advantages are ones of convenience and ease of use (you can use clincher tires and tubes, and regular brake pads), which largely accounts for the rise of carbon clinchers.

I count myself in that group of riders who simply does not have the time or desire to put in the extra effort to ride tubulars. But I’ve been eager to see why so many roadies are flocking to deep carbon rims, so I was happy to be able to test 3T’s foray into the carbon clincher market.

For decades an industry leader in components (bars, aerobars, stems, seatposts, etc.), 3T is now seeking to make inroads in wheels as well. First, the company launched its carbon tubular line, and now has introduced its first carbon clinchers.

The out of the box quality created an immediate impression. These are well-made wheels that ship with the quality control sheet direct from 3T’s Italian production facility showing the radial and lateral runout specs for each wheel (basically, movement up and down, and side to side, as they spin), and the individual spoke tensions. Even if you don’t care a whit about such things, it’s a good indication of the level of care and craftsmanship invested in the product. The wheels ship with rim tape installed, but unlike some other deep dish carbons, they don’t include valve extenders.

In short, the Team Stealth model I tested, with understated graphics, is a hot-looking set of wheels. (It’s the antithesis of so many other wheels on the market, which plaster their logos all over the wheels.) With black Sapim CX-Ray spokes and black hubs, they live up to the Stealth name — and have drawn raves from biking buddies and fellow riders alike.

It’s the first time I’ve ever tested a product that other roadies literally stop and stare at! I’m not kidding.

And if they’re not eyeballing the wheels, they’re adding to the list of comparisons I’ve heard about the distinct noise that emanates from these hoops when They’re rolling — even at fairly slow speeds.

One rider on a recent century kept glancing around at me as I approached. When I finally pulled up beside him, he told me he thought there was a car behind him, and he kept looking for it. I’ve also heard “motorcycle” and, strangely, “tornado!”

Of course, such noise is not uncommon for deep-dish wheels. I’d prefer their Stealth-iness to extend to the auditory realm. But some riders may like sounding like a freight train on approach. And I can certainly accept the noise for what these wheels deliver in terms of performance.

How They Stack Up to Other Carbon Clinchers

Like a lot of other carbon clinchers, the 3Ts use Sapim CX-Ray bladed spokes (18 front, radial; 24 rear, radial left, 2-cross on the drive side) to help attain the high tension needed for a stiff wheel. Likewise, they trade weight for convenience like all other carbon clinchers, with the 63mm deep carbon fiber rim bonded to a 6000-series aluminum alloy tire bed / brake track extrusion.

I’ve ridden the 3T Accelero 60s in a variety of conditions over some 800 miles (1,300 km) during the test period, including solo training rides, hammering group rides, a fast metric century, cheeky sessions with riding buddies, and in varying windy conditions up to 15 – 20 mph (24 – 32 kph). All of it was done in the fairly hilly environs in and around Atlanta.

In short, these wheels are stiff, responsive — and fast. Their aero advantages are apparent in pretty much any riding situation where you pass about 20 mph (32 kph). Once you’ve spun up to that speed, the aerodynamics really kick in, smoothing the air flowing around the wheels and helping you gain speed for the same power output, compared to non-aero wheels.

An interesting by-product of deep-dish aero wheels is that they also increase stability, making your bike hold fast to its line. It requires a bit more effort to steer at speed, something you quickly get used to. But the feeling of stability adds confidence and better handling in many situations, like downhill curves and in tight pack conditions.

Where They Help — And don’t

Because of their properties, these make for great race wheels, super TT wheels, and really are a good choice for any riding situation in which you want sustained speed.

I rode them in some fairly hilly and windy conditions, and in most cases where the hills aren’t super long or steep, and the wind doesn’t exceed a sustained 15 mph, They’re stellar performers.

However, because of the weight penalty, They’re not an ideal choice for any real climbing. Lighter wheels will serve you better. And deep-dish wheels can compound the effects of high winds — especially cross-winds and quartering headwinds, which have the potential to test your bike-handling skills on seriously blustery days.

After you’ve ridden them for a while, you get a good feeling for which conditions you might want to avoid. On the positive side, because you don’t need to fuss with different brake pads, you can quickly swap out the wheels for your lower-profile hoops and hit the road.

The more you ride them, though, the more you get used to the effects of the wind. (Our tech guru, Jim Langley, says he’s grown so used to riding his 50mm carbon tubulars that he’s not bothered at all by cross-winds or the buffeting caused by a passing big truck.)

The other factors at play are rim depth, and rider weight. The deeper the rims, and the lighter the rider, the greater the potential wind effect. Keep this in mind when considering which wheels best meet your specific purposes. Once you’ve got some miles on your wheels, you’llfigure out your own personal tolerances for wind, hills, etc.

In the age of numerous $10,000+ high-end bikes, upgrading to a nice set of carbon fiber aero wheels is a relatively affordable way to add some range and utility to your existing bikes. They make for great TT and race wheels and are proven performers in helping add speed across conditions. Carbon clinchers are ideal for those of us who don’t want to deal with tubulars. And 3T’s successful entry into the carbon clincher arena adds another great choice to the array of available wheels on the market. They’re well-made, high-performance carbon clinchers with looks to boot.