A couple days ago, I sipped a “Pizza Margherita.”

Yes, you read that right. I said “sipping” pizza. I could have said “slurping,” I guess.

I’ve tried untold different energy foods over the years, and CLIF fairly regularly sends along their new and seasonal products to try (like Iced Gingerbread and Pecan Pie bars in the winter, or Berry Pomegranate Chia bars, or Chocolate Hazelnut Builder’s Protein Bars).

Most of them are simply variations on a theme. We’ve all likely tried various energy gels and bars. The new varieties can be a welcome addition to the staid old flavors. Some, like the new Chocolate Hazelnut Builder’s bar are not bad – riffing off the uber-popular Nutella chocolate hazelnut spread (which my 17-year-old son practically inhales!). Of course, other flavors don’t quite always hit the mark.

I got a package recently that was most intriguing. It wasn’t just another variation on a theme, but rather an outside-the-box approach from CLIF. The line is called CLIF Organic Energy Food, and each package is certified USDA organic, and gluten free. They’re designed to be consumed during activity, much like a gel, with a screw cap on top and a wide-straw-like opening from which to sip or slurp the product. The packages are substantially bigger than a gel pack, and they contain 3 to 4 ounces of product, with calorie counts from 100 to 200 per package.

The packages say: “Inspired by the home recipes of our Team Clif Bar athletes, we’ve created a line of performance food made from real, organic ingredients like….”

Here’s where the new stuff starts to get a little “out there” – the flavors include Banana Beet Ginger, Banana Mango Coconut, Sweet Potato with Sea Salt, and Pizza Margherita. (I can’t say I’ve ever had an energy food that included beet, sweet potato, or pizza. You could put together a complete meal, with an entrée, side dish and dessert from this lineup!)

The Savory Flavors Take Some Getting Used To

I’ve tried all these flavors, starting with the Pizza Margherita. Like many cyclists, I get tired of pre-packaged energy food and sometimes prefer “real” food on rides. Still, I’ve never brought along a slice of pizza! The Pizza Margherita actually tastes quite like what you would imagine if you blended a slice and drank it through a straw. As unappealing as it may sound to slurp a slice, it was a decent enough change of pace on a recent ride. The idea – and the consistency – may take some getting used to. But if you’re looking for something different, this certainly qualifies.

The Sweet Potato with Sea Salt was a bit more challenging to my palette. I love sweet potatoes, and much prefer them to regular spuds, but the consistency, combined with the taste, made it a bit more difficult to get down than the Pizza.

It may have something to do with this warning I spied on the back of the package – Caution: Not recommended for people on a sodium-restricted diet, pregnant women, or children. Indeed, the sodium content of the Pizza version is 600mg, or 25% of the recommended daily allowance. The Sweet Potato comes in at 550mg, or 23%. They’re also loaded with Potassium, to almost the same degree. So they certainly pack some replenishment if you want to reload quickly.

I’ll try the savory offerings a couple more times to give them a fair shake, but I’m more likely to seek out a “real food” option if I want a salty alternative on a ride.

The Fruit-Based Organics Are Quite Tasty

The fruit-based organic offerings are much more aligned with the “flavor profiles” we normally expect in an energy food. And thus, more palatable. Both the Banana Beet Ginger and 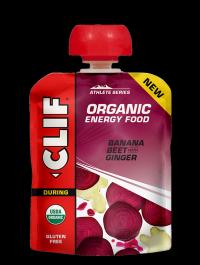 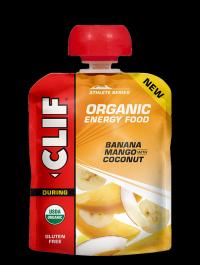 Banana Mango Coconut are quite tasty and easy to ingest. Again, the consistency of the organic product does, in fact, make it seem like you’re eating “real food” (which you are) when compared with any other gel pack you’ve ever eaten. Think: smoothie vs. the typical gel consistency.

I’m much more likely to work the fruit-based organics into my on-the-bike food rotation. However, each 3.17-ounce (90g) package delivers only 100 (Banana Mango Coconut) or 110 (Banana Beet Ginger) calories. And in a package almost 3 times the size of some gels, which deliver the same calories in the smaller package, you may be forced to choose how much extra volume and weight you’re willing to tote on a ride.

Overall, though, it’s nice to know that there are some true organic alternatives to the “who knows what’s in those things?” energy foods we’ve all be eating over the years.

John Marsh is the editor and publisher of RBR Newsletter and RoadBikeRider.com. A rider of “less than podium” talent, he sees himself as RBR’s Ringmaster, guiding the real talent (RBR’s great coaches, contributors and authors) in bringing our readers consistently useful, informative, entertaining info that helps make them better road cyclists. That’s what we’re all about here—always have been, always will be. Click to read John’s full bio.

Really? It’s Been One of the Warmest U.S. Winters?

And for many of my brethren up the East Coast and across the central plains, this headline must have them rolling on the floor laughing.

My friend and occasional RBR contributor Seth Shaw, who lives in Connecticut, emailed me this morning to say that his state is headed for the coldest February on record. And The Wheel Builder columnist Mike Tierney, who resides near Toronto, regularly shares with me both his miserably cold temps and snow pics from “the Great White North.”

They’re calling this literal Arctic blast the “Siberian Express,” because the winds fueling this winter’s cold spell originate in Siberia and track over the Arctic Circle before dropping into Canada and the U.S.

But elsewhere across the country, including much of the western half of the U.S., has been basking in record temps of the sixth-warmest winter on record, according to the National Climatic Data Center (NCDC), which has data going back to 1895.

Across the U.S. so far in February, according to an article in USA Today, the NCDC has reported – get this – 4,074 records set for warm temperatures (mostly in the West) and only 236 records for cold temperatures.

Cities that have seen record warm temps include Seattle, San Jose, Calif., Las Vegas, Reno, Salt Lake City and Butte, Montana. Some of those places, such as Salt Lake, are seeing temperatures more than 15 degrees above average.

So, for those of you lucky enough to be in the “sun belt” this winter, we wish you the best and hope you’re taking full advantage of the opportunities to ride in nice weather. (And we hope those of you Down Under are having a nice summer!)

And for those readers in the East and across the Upper Midwest – well, hang in there. Even if your local groundhog was right in predicting 6 more weeks of winter back on Groundhog Day (that’s February 2, for those not familiar with this strange tradition), we’re already more than 3 weeks through that! That’s only, what, about 4 feet of snow in Boston!?

Seriously, spring can’t be that far away. We’ll all be riding in short-sleeve jerseys and shorts before we know it. Keep hope alive! — J.M.

P.S. Since first writing this, it has snowed twice in Atlanta. Keep hope alive, indeed!

In case you missed it, the U.S. Consumer Product Safety Commission recently announced the following product recall. Note that the Scott Vanish Evo helmets are being recalled because “The bicycle helmets do not comply with the impact requirements of the CPSC safety standards for bicycle helmets.” Thus, owners are being asked to return the helmets for a refund.

Click the following link for complete details of the recall: