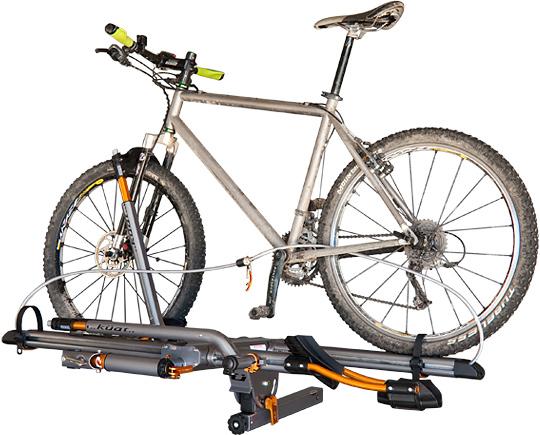 A couple of years ago at the Interbike bike show, I was introduced to Springfield, Montana-based Kuat Racks (say “Koo-At”) and was impressed by their innovative designs and features. I made a note to keep them in mind should I need a rack in the future.

So, when we recently purchased Roadtrek’s smallest RV, which is built on a Mercedes Sprinter chassis with a 2-inch hitch on the back, I checked Kuat’s website and saw that their NV model would fit the bill.

Would the NV fit the RV?

It Wasn’t quite that easy. The Sprinter has two doors on the back, and the RV has a spare tire holder blocking the left door. So, there needed to be enough clearance for the rack to fit behind the spare tire.

In addition, I wanted the rack to move out of the way for access to the right rear door to get into the back of the van. Finally, I needed the rack to be easy to remove so I could open both doors, which requires lowering the spare tire holder that blocks the left door to a horizontal position.

To get everything to work, I had to purchase an 11-inch long extender for the Sprinter’s hitch. Note that rack manufacturers usually warn against or even prohibit using hitch

extenders on RVs. This is because most RVs position the rack well behind the rear wheels, where the rack is subjected to massive forces over bumps. But That’s not an issue on our RV, which is on the shorter Sprinter chassis (19.5 feet / 5.9m long).

Still, since RVing and driving a somewhat oversized vehicle are new to me, I couldn’t help but worry about my bikes on the back. So I wanted to be sure to get an overbuilt rack. The NV is actually designed around mountain bikes with up to 29 x 3-inch tires, and weighing up to a whopping 60 pounds (27 kg) each. It will also carry bikes down to 20-inch kid’s bikes (it comes with an adapter for these). So, I thought it would easily handle my featherweight roadsters.

The reason it can easily carry all these different sizes and types of bicycles is because it’s a tray-mount bike rack, meaning that you don’t have to do anything to your bike to put it on the rack except lift it and place the wheels on the tray. Also, the rack only touches your tires. Nothing holds the frame. And because the NV spaces the bicycles 13 inches apart, they can’t bump into each other or rub, either. These are both nice features for carbon road bikes that can be damaged by rubbing and bumping.

To secure bikes to the tray, there’s a telescoping arm that ratchets down to close on the front wheel just ahead of the brake, pressing the wheel down into a pocket for it in the wheel trays. To finish attaching the bikes, you simply thread the rear wheel straps into their holders and pull down to ratchet them tight and cinch the rear wheel in place. The whole process takes about 5 seconds for each bike, and it’s just as fast to get them off.

In fact, getting the bikes on/off is so easy, it’s kind of hard to believe it works. At first, I kept tugging on the bikes to see if they were really on there, and pushing down on the arms and pulling on the straps. But the connection is super solid and it holds fast. I know because we drove 7,000-plus miles on some of the worst roads in the country, to New Hampshire and back to California with it, and nothing loosened up a bit. That included a week of searing heat and several days of pounding rain.

The way the bikes attach to the rack is similar to other tray-mount hitch racks I’ve seen, but the way the NV attaches and stays tightly fastened in the hitch is advanced and quite an advantage. Instead of the typical bolt-on arrangement, on the NV there’s a large nylon knob on the end of the rack’s main support tube.

By simply tightening this knob with your hand, a cam inside the rack presses an oversize ball bearing mounted in a pocket on the NV’s insertion end into the vehicle hitch, taking up all the slack between the two and securely fastening the rack. No tools are required, and though I kept checking this knob across the country, it never loosened, and the rack stayed tight.

It was also easy to loosen the knob and remove the rack when needed. The rack remains tight when you loosen the knob, but once you bang the knob with your hand, the cam lets go and the rack comes right out. This is when you appreciate how much aluminum is in the NV, because at only 49 pounds, it’s significantly easier to lift, carry and handle than the usual 100% steel hitch racks that are so common.

Folds up and down

I only had to remove the rack because of the spare tire holder. If that Wasn’t there, I could have used the NV’s folding feature. It has a giant spring-loaded quick release lever on the bottom. You pull it open and lift or push down, and the rack snaps up to its folded position behind the doors or down so that a tailgate can be opened. Or in my case, my right rear door could be opened.

Being able to fold the rack up on the back of our RV meant we could still parallel park in a standard space. With the rack down and bikes on it, the RV was a little too long for that.

To protect your precious cargo, the NV comes with a locking hitch pin so the rack can’t be stolen from the vehicle. And there’s an integrated cable lock that is connected to the wheel trays and stores inside them, too. You just pull it out, thread the ends through the bike frames and wheels, and lock the ends together to secure the bikes to the rack. The keys for the cable lock and hitch pin are the same, which is nice.

Unfortunately, my cable lock developed some issue and wouldn’t close the second time I tried to use it. I was happy it didn’t break when it was locked or I would have had to cut through the cable. To safeguard my bikes on the trip, I simply purchased a 6-foot OnGuard cable lock, and that worked fine. (Kuat is sending me a replacement cable/lock, as they guarantee all their rack components.)

I wouldn’t have had to purchase that lock if I had been smart and brought along Kuat’s $29 Bottle Lock. They sent me one to try but I didn’t think I’d need it, so I left it at home. It’s a coiled 5-foot cable and lock built into a standard bottle so it fits nicely in a bottle cage. To lock your bike, you just pull the end of the cable and it unravels (the inside of the bottle spins, the outside doesn’t) to full length. You then lock its end into the top of the bottle. The keys are stored in a compartment in the bottom of the bottle.

The Bottle Lock is a convenient, lightweight and cool lock I could have used on the rack and will use riding around town. It comes in several different colors.

Kuat thought of everything

The NV’s ease of use, light weight and secure bike and vehicle attachment make it a wonderful rack to use. But it has another trick — and one I had to have: it features their Trail Doc 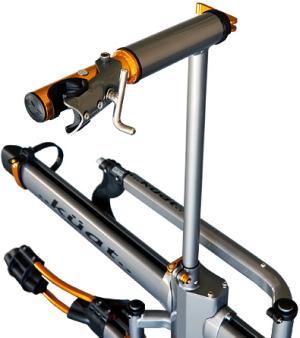 repair stand! When not in use, this sits at the end of the rack’s main support. To use it, you remove the bikes, fold the rack up, loosen the Trail Doc’s quick release and extend it up until it clicks in place.

Voila! You have a very nicely constructed bike repair stand that holds bicycles by the seatpost or top tube and lets you work right there by your vehicle like a pro. For me, it means I no longer have to bring along a separate repair stand and one less thing to have to carry in a small RV is a great bonus.

Finally, as impressed as I am with the design, features, function and quality of the NV, I am just as impressed by its appearance. When you buy a fancy vehicle, it’s hard to get yourself to put anything on it. But the NVs lustrous grey and gold finish makes it a stunner, and a few people on our trip actually came up and asked us if the rack had been custom made by Mercedes for our RV. That’s quite a compliment to Kuat’s design, and perhaps why they named it what they did.

Click to see a video and learn more about the Kuat NV rack.