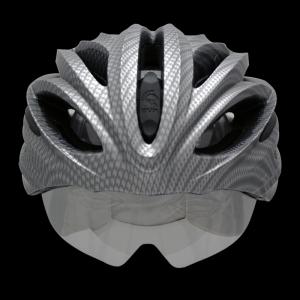 Revolutionary Helmet Hits All the Marks

In our Interbike bike show coverage last year we excitedly mentioned a promising helmet we spotted with a unique feature — a retractable lens (I think of it more as a faceshield and use that word here). The lid on display, called the Dux Helm, was a prototype in a Plexiglas case, and we didn’t have a chance to ride in it or even try it on. But we did ask for a sample for review when the production models became available.

The retractable faceshield on the Dux grabbed our attention because also at the show were Giro’s Air Attack Shield and Kask’s Bambino, two other helmets with built-in faceshields (we hope to test these soon, too). But on those models, the faceshields are held on with magnets, and you remove the shield and put it in a different spot on the helmet — sort of the way some sports car roofs are removed and put in the trunk.

Being able to raise and lower the faceshield seemed to us to be a head-slapping and brilliant solution. Still, when the box arrived I was expecting to find an over-built helmet since I thought something would have to give in order to get the faceshield and mechanism inside it.

I needn’t have worried. The Helm looks like any other current road helmet. So much so that not one of my cycling buddies noticed anything apart from me having a nice new helmet when I rolled up wearing it.

Which is when I wowed them by reaching up, putting my finger on the little rubber slider on the front and sliding it down to lower the mirrored faceshield over my eyes. That got their attention. One of the guys called me Buck Rogers, but Buzz Lightyear is probably more like it. Because the lens raises and lowers so smoothly and hides so nicely inside the helmet, it’s like a magic trick: now you see it, now you don’t. (Note: a mirrored faceshield was among the four lenses sent to me to test. However, the mirrored lens is not offered for sale on the Dux site. Only the smoked, clear and amber lenses are currently being sold, at $25 Canadian each.)

Comparing the Helm to my other helmets, it appears to only have slightly thicker foam in front to create the compartment for the faceshield to slide into. It’s nothing you notice looking at the helmet. When the faceshield is retracted, you can see it inside the top of the helmet if you look closely, and it does partially block the air vents.

Having a protective lens that you can lower and raise with ease has many advantages for those of us who wear non-Rx sunglasses. No longer do you have to remember to put on your glasses, or worry about leaving them somewhere on a ride or sitting, or stepping on them if you put them down.

Plus, the lens is significantly larger than eyewear, too, so bugs and debris are less likely to hit your face and eyes. But, best of all, you never have to fumble around trying to find a safe spot for your glasses when you need to take them off.

While I’ve only ridden the Dux a few times, I have tried to give it a serious test. I’ve done multiple intense climbs, pushing myself hard to see if I could get sweat on the lens as I always do with my glasses. I’ve also descended three times at speeds approaching 50 mph (80 kph) and tested the lid with the faceshield lowered and raised.

I’m amazed with how the Helm and its faceshield work. I couldn’t get it to fog up or become sweaty — not even one drop (to be fair, the testing was not done in hot weather). The spacing between the face is just right and it doesn’t change like it can with glasses. I have ample protection for my eyes yet plenty of ventilation to prevent fogging, too.

And at all speeds I did not notice any issues with the helmet getting blown out of position on my head or with excessive wind noise with the lens up or down. Dux nailed the faceshield’s shape so that it’s just right. It provides plenty of protection and never bumps into the bridge of your nose or face. Also, because it’s a lens and there’s no frame, nothing obstructs your vision, which is another great feature.

The faceshield doesn’t rattle. It stays where you put it and is easy to move, too. It’s awesome being able to raise it to cool off for a bit with the breeze in your face and then just slide it back down. No more dropped glasses or ruined ones. And it’s also easier to wipe your face without having to remove and hold glasses in your hand or teeth as is my bad habit.

The only issue I experienced with the faceshield was a very slight rubbing in two places (in the process of raising and lowering it) that created light marks on the lens. I’m raising and lowering it all the time, so they will probably get worse.  Ideally the lens would remain perfect, with nothing to distort your vision.

I give the fit and comfort high marks, too. There are 24 large vents and a standard dial-a-fit knob on the back to tighten and loosen the helmet, even while you’re riding, if needed. THere’s nice padding and soft straps, too. There was even an extra pad over the strap at the chin, but I don’t need that so I was happy it was removable.

Overall, I give the Dux Helm just under our highest rating. I love having the retractable faceshield built into a great-looking, lightweight and comfortable helmet. And this revolutionary product is offered at a competitive price, to boot. I think you’lllove it as much as I do.