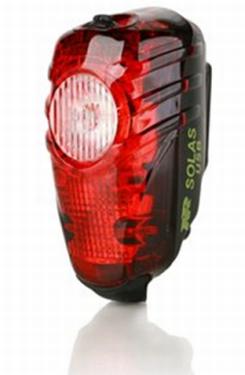 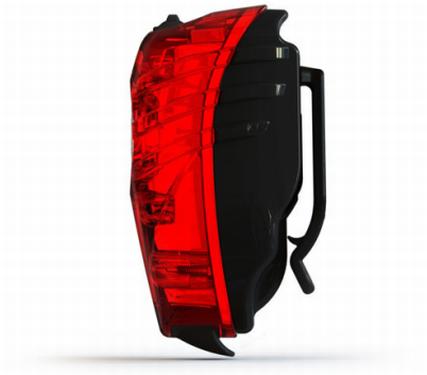 A good tail light is a vital piece of equipment for commuters, dusk and dawn rides, and increasingly for daylight rides by safety-conscious roadies. The Niterider Solas Tail Light is a new design powered by a 2W LED bulb. It is rechargeable via USB and retails at a recommended $45. This light has a range of attributes that should appeal to any road cyclist.

The switch is easily located on the top of the light. Pressing it will bring up the first of four modes, and further presses will cycle it between those modes and back to the off position.

There are two flashing modes, an always-on mode and a quite useful mode that lowers the output of this very bright light for group rides. Due to the high power output, anyone riding behind you will be thankful of this mode!

At the base of the unit is the recharging dock. It has a sturdy cover that remains in place when in use but is easily removed for recharging. The cover is water-tight and does a fine job keeping the elements out on rain rides and from any spray that may come up from wet roads.

Recharging is as simple as plugging the unit into to a USB power source with the included USB cable. Recharging takes around 1.5 to 2 hours, with an indicator light changing to blue LED to show when charging is complete.

The light comes with a mount that also allows the light to be rotated — useful if you have an unusual mounting point on your bike. The mount also has a neat tool-free design that means it can be quickly installed on the bike with just a few turns of the plastic screw head. I was able to complete the installation in less than two minutes. The mount has proven to be secure in testing over the sometimes less-than-ideal roads we have here in North Carolina.

Claimed run times for the Solas are:

The light has a wide field of view and does not require precise alignment for you to be visible from the rear in traffic.

I used the light primarily for commuting. On early morning rides as the sun was slowly rising and also for my daylight rides home, I found myself using the second flashing mode more often. This mode seemed to be less distracting to drivers while continuously alerting them to my presence on the road. For fully dark rides, I used the high steady mode, which uses the full power of the 2W LED bulb.

So how did the light perform? In short, it represents a step up for me from my previous light of choice, the Portland Design Works Radbot 1000, which I previously reviewed for RBR.

In using the Solas, I always felt certain that I was very visible on the road to drivers. This is the absolute brightest rear light I have ever used. Warning:  In fact, the light is so bright that I highly recommend not looking directly at it. On my commutes, I noticed I was given a wider than normal berth by passing cars — which was very welcome.

The only issue I have had with it is that the mount has sometimes rotated slightly downward. This has been easily fixed by hand and by just tightening the screw a little more.

This is truly the best tail light I’ve yet used. Although the price is higher than some, the fact that the light is USB rechargeable and that it has truly exceptional brightness make it a great choice.